How Camel Milk is Effective on Diabetes?

Prof. Dr. Taherah Mohammadabadi. It is detected a high amount (about 52 U/L) of insulin in camel milk, which does not form coagulum in the acidic media of the stomach and can be an effective alternative for insulin in diabetes.

Using camel milk in diabetes patients causes a reduction in blood sugar and required an insulin dose of about 30%.

Also, camel milk lactoferrin has immune-modulatory effects on beta-cells of the pancreas and reduces insulin doses required in type 1 and 2 diabetic patients.

Recently, consumers’ interest in camel milk has been largely due to awareness of its special health benefits. Camel milk is a unique source of nutrients and is considered a superfood with medicinal values. The smaller size of nobodies of camel milk enhances the immune and anti-inflammation responses. Also, a higher amount of zinc in camel milk has a key role in maintaining the normal function of the immune system. Camel milk has hypoglycemic effects, which may be beneficial in the healing of diabetes due to insulin-like protein.

It is certificated, the specific proteins and bioactive peptides of camel milk that act directly or indirectly on specific cellular pathways and control insulin synthesis and secretion by the pancreatic β-cells. Also, camel milk immunoglobulins have anti-inflammatory, anti-apoptotic, and anti-oxidative effects that influence the secretory activity and function of the pancreatic β-cells that can explain the hypoglycemic effects of camel milk.

Also, it is concluded that lactoferrin can be effective on insulin and insulin receptor signaling. On the base of studies, lactoferrin harms hyperglycemia and positively affect insulin sensitivity and anti-inflammatory responses and activate insulin receptor, therefore can be involved in the transport and the glucose uptake by the insulin-sensitive tissues through the membrane glucose transporter 4 and or direct positive modulation of this transporter activity.

Some researches on using camel milk in diabetic patients

A study on raw camel milk consumption by 500mL to type 1 diabetic for 52 weeks showed in the group receiving camel milk, there was a significant reduction in HbA1c, mean blood glucose, and required insulin dose.

Type 1 diabetes patients received 500 ml camel milk for 3 months. After 3 months, there was a significant improvement in fasting blood sugar and HbA1c levels and a significant reduction in insulin requirement by a 30% reduction.

Type 2 diabetic cases consumed 500 mL of either pasteurized camel milk or cow milk for two months.  Mean insulin concentration was significantly increased from 64.59 to 84.03 pmol/L by the camel milk. Still, no significant differences were shown in fasting blood sugar, lipid profile, blood pressure, and insulin resistance between the two groups. These results suggest that camel milk might control insulin levels in patients with type 2 diabetes.

In separate clinical trials for 3 months, 6 months, and 1 year, consuming camel milk showed significant hypoglycemic effect and reduced insulin requirement at the end of 2 years in patients compared to the control group.

Another study on 50 types 1 diabetic patients clearly showed that camel milk mixed with insulin was an effective supplementation, as adjunctive therapy in the management of type 1 diabetes and the daily doses of insulin can be reduced up to 66% (20 units/day) after 12 weeks of treatment.

The unique effects of camel milk as an adjunctive superfood on health. Available from:

Camel milk has supported Bedouin, nomad, and pastoral cultures since the domestication of camels millennia ago. Herders may, for periods, survive solely on the milk when taking the camels on long distances to graze in desert and arid environments. The camel dairy farming industry has grown in Australia and the United States as an environmentally-friendly alternative to cow dairy farming using a species well-adapted to arid regions.

Camel milk has different nutritional characteristics from cow milk. Still, the proportions of nutrients can be highly variable based on several factors, including the type and age of the camel, climate, what it eats, and milking method. It can make yogurt and ice cream products but is not so easily turned into butter or cheese.

The chemical composition of camel milk including 3.4% protein, 3.5% fat, 4.4% lactose, 0.79% ash, and 87% water. A higher amount of vitamin C, unsaturated fatty acids, low cholesterol, and lack of beta-lactoglobulin are the unique properties of camel milk compared to other kinds of milk. The lactose of camel milk is easily metabolized in lactose-intolerant people due to less production of casomorphin in camel milk that increases intestinal motility; therefore, lactose exposes more to lactase enzyme and digest quickly.

The insulin-like protein in camel milk, due to the low phosphorylation of the caseins, is different from the other milk that does not destroy in the stomach.

Desert nomad tribes use camel milk, which can be readily made into yogurt, as a staple food and can live for up to a month on nothing but camel milk.

In 2017, world production of the whole fresh camel milk was 2.85 million tonnes, led by Somalia and Kenya with 64% of the global total (table). Mali and Ethiopia were other significant producers.

After being introduced to Australia in the 1840s to assist with exploration and trade in the harsh interior before being overtaken by modern communications and transport methods, the feral camel population has grown to more than 1.2m, the world’s largest. Australia’s first camel dairies opened in 2014, and the number has been growing ever since, with demand growing locally and internationally. 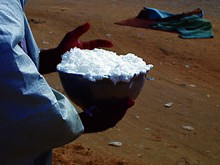 Pakistani and Afghani camels are supposed to produce the highest milk yields, up to 30 liters per day. The Bactrian camel produces 5 liters per day, and the dromedary produces an average of 20 liters per day. Intensive breeding of cows has created animals that can produce 40 liters per day in ideal conditions. With their ability to go 21 days without drinking water and produce milk even when feeding on low-quality fodder, camels are a sustainable option for food security in difficult environments.

According to the United States Food and Drug Administration (FDA), camel milk contains 3% fat. However, it is reported in the literature that the proportion of fat in the milk varies from country to country and region to region and is also dependent upon diet, level of hydration of the animal, and type of camel. In a detailed report published by the Food and Agriculture Organization of the United Nations in 1982, a table shows fat content varying from as low as 1.1% (in arid areas of Israel) to 5.5% (Ethiopia). A 2015 systematic review reports the fat content of dromedary milk as between 1.2% and 6.4%.

Camel farmers may provide a degree of control over factors affecting the nutritional content of the milk produced by their camels. Producers of camel milk in Australia state that their products have lower fat and lower lactose than cow’s milk.

Cheese from camel milk is more difficult to make than cheese from the milk of other dairy animals. In camel-herding communities, camel milk cheeses use spontaneous fermentation or lactic fermentation to achieve a sour curd; in camel farming in Sudan, the Rashaida tribe uses this method to store surplus milk during the rainy season, pulverizing the dried curds and adding water for consumption in the dry season. In Mongolia, camel milk is consumed as a product at various stages of the curd-making process. However, the milk does not coagulate easily, and bovine rennet fails to coagulate the milk effectively. Developing less wasteful uses of the milk, the FAO commissioned Professor J.P. Ramet of the École Nationale Supérieure d’Agronomie et des Industries Alimentaires (ENSAIA), who was able to produce curdling by the addition of calcium phosphate and vegetable rennet in the 1990s.

Camel milk can also be made into ice cream. In Central Asia, a drink called chal or shubat is made from fermented camel milk.

How the Ketogenic Diet Works for Type 2 Diabetes