Ketone Diet in Epilepsy Why Important?. The ketogenic diet is a high-fat, adequate-protein, low-carbohydrate mainstream dietary therapy in children and adults. The diet forces the body to burn fats rather than carbohydrates.

Typically carbohydrates in food are converted into glucose, which is then transported around the body and is essential in fueling brain function. However, suppose only a little carbohydrate remains in the diet. In that case, the liver converts fat into fatty acids and ketone bodies, passing into the brain and replacing glucose as an energy source. An elevated level of ketone bodies in the blood (a state called ketosis) eventually lowers the frequency of epileptic seizures.

Around half of the children and young people with epilepsy who have tried some form of this diet saw the number of seizures drop by at least half, and the effect persists after discontinuing the diet. Some evidence shows that adults with epilepsy may benefit from the diet and that a less strict regimen, such as a modified Atkins diet, is similarly effective.

This classic ketogenic diet contains a 4:1 ketogenic ratio or ratio by fat weight to combined protein and carbohydrate. This is achieved by excluding high-carbohydrate foods such as starchy fruits and vegetables, bread, pasta, grains, and sugar while increasing the consumption of foods high in fat such as nuts, cream, and butter.

Most dietary fat is made of molecules called long-chain triglycerides (LCTs). However, medium-chain triglycerides (MCTs)—made from fatty acids with shorter carbon chains than LCTs—are more ketogenic. A variant of the classic diet known as the MCT ketogenic diet uses a form of coconut oil, which is rich in MCTs, to provide around half the calories. As less overall fat is needed in this diet variant, a more significant proportion of carbohydrates and protein can be consumed, allowing a greater variety of food choices.

In 1994, Hollywood producer Jim Abrahams, whose son’s diet effectively controlled severe epilepsy, created the Charlie Foundation for Ketogenic Therapies to promote diet therapy further. Publicity included an appearance on NBC’s Dateline program and …First Do No Harm (1997), a made-for-television film starring Meryl Streep. The foundation sponsored a research study, the results of which—announced in 1996—marked the beginning of renewed scientific interest in the diet.

Possible therapeutic uses for the ketogenic diet have been studied for many additional neurological disorders, some of which include: Alzheimer’s disease, amyotrophic lateral sclerosis, headache, neurotrauma, pain, Parkinson’s disease, and sleep disorders. 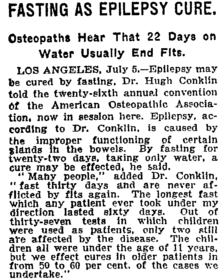 Physicians of ancient Greece treated diseases, including epilepsy, by altering their patients’ diets. An early treatise in the Hippocratic Corpus, On the Sacred Disease, covers the condition; it dates from c. 400 BC. Its author argued against the prevailing view that epilepsy was supernatural in origin and cure and proposed that dietary therapy had a rational and physical basis.

The first modern study of fasting as a treatment for epilepsy was in France in 1911. Twenty epilepsy patients of all ages were “detoxified” by consuming a low-calorie vegetarian diet, combined with periods of fasting and purging. Two benefited enormously, but most failed to maintain compliance with the imposed restrictions. The diet improved the patients’ mental capabilities, in contrast to their medication, potassium bromide, which dulled the mind.

In 1921, Rollin Turner Woodyatt reviewed the research on diet and diabetes. He reported that the liver produced three water-soluble compounds, β-hydroxybutyrate, acetoacetate, and acetone (known collectively as ketone bodies); in the liver, in otherwise healthy people were starved or if they consumed a very low-carbohydrate, high-fat diet. Dr. Russell Morse Wilder at the Mayo Clinic built on this research and coined the term “ketogenic diet” to describe a diet that produced a high level of ketone bodies in the blood (ketonemia) through an excess of fat and lack of carbohydrates. Wilder hoped to obtain the benefits of fasting in a dietary therapy that could be maintained indefinitely. His trial on a few epilepsy patients in 1921 was the first use of the ketogenic diet as a treatment for epilepsy.

Wilder’s colleague, pediatrician Mynie Gustav Peterman, later formulated the classic diet, with a ratio of one gram of protein per kilogram of body weight in children, 10–15 g of carbohydrate per day, and the remainder of calories from fat. Peterman’s work in the 1920s established the techniques for induction and maintenance of the diet. Peterman documented positive effects (improved alertness, behavior, and sleep) and adverse effects (nausea and vomiting due to excess ketosis). The diet proved very successful in children: Peterman reported in 1925 that 95% of 37 young patients had improved seizure control on a diet, and 60% became seizure-free. By 1930, the diet had also been studied in 100 teenagers and adults. Clifford Joseph Barborka, Sr., also from the Mayo Clinic, reported that 56% of those older patients improved their diet, and 12% became seizure-free. Although the adult results are similar to modern studies of children, they did not compare well to contemporary studies. Barborka concluded that adults were least likely to benefit from the diet, and the use of the ketogenic diet in adults was not studied again until 1999.

The ketogenic diet was widely used and studied during the 1920s and 1930s when the only anticonvulsant drugs were sedative bromides (discovered 1857) and phenobarbital (1912). This changed in 1938 when H. Houston Merritt Jr. and Tracy Putnam discovered phenytoin (Dilantin), and the focus of research shifted to finding new drugs. With the introduction of sodium valproate in the 1970s, drugs were available to neurologists that were effective across a broad range of epileptic syndromes and seizure types. The use of the ketogenic diet, by this time, restricted to complex cases such as Lennox–Gastaut syndrome declined further. 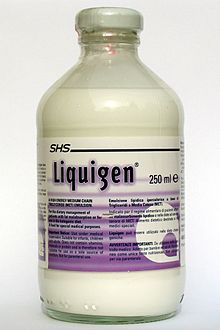 In the 1960s, medium-chain triglycerides (MCTs) produced more ketone bodies per unit of energy than normal dietary fats (primarily long-chain triglycerides). MCTs are more efficiently absorbed and are rapidly transported to the liver via the hepatic portal system rather than the lymphatic system.The severe carbohydrate restrictions of the classic ketogenic diet made it difficult for parents to produce palatable meals that their children would tolerate. In 1971, Peter Huttenlocher devised a ketogenic diet where about 60% of the calories came from the MCT oil. This allowed more protein and up to three times as much carbohydrate as the classic ketogenic diet. The oil was mixed with at least twice its volume of skimmed milk, chilled, and sipped during the meal or incorporated into food. He tested it on 12 children and adolescents with intractable seizures. Most children improved in seizure control and alertness, similar to the classic ketogenic diet. Gastrointestinal upset was a problem, which led one patient to abandon the diet, but meals were easier to prepare and better accepted by the children. The MCT diet replaced the classic ketogenic diet in many hospitals, though some devised diets that were a combination of the two.

The ketogenic diet achieved national media exposure in the US in October 1994, when NBC’s Dateline television program reported the case of Charlie Abrahams, son of Hollywood producer Jim Abrahams. The two-year-old had epilepsy that had remained uncontrolled by mainstream and alternative therapies. Abrahams discovered a reference to the ketogenic diet in an epilepsy guide for parents. They brought Charlie to John M. Freeman at Johns Hopkins Hospital, which had continued to offer the therapy. Under the diet, Charlie’s epilepsy was rapidly controlled, and his developmental progress resumed. This inspired Abrahams to create the Charlie Foundation to promote the diet and fund research. A multicentre prospective study began in 1994; the results were presented to the American Epilepsy Society in 1996 and were published. In 1998. There followed an explosion of scientific interest in the diet. In 1997, Abrahams produced a TV movie, …First Do No Harm, starring Meryl Streep, in which the ketogenic diet successfully treats a young boy’s intractable epilepsy.

By 2007, the ketogenic diet was available from around 75 centers in 45 countries, and less restrictive variants, such as the modified Atkins diet, were in use, particularly among older children and adults. The ketogenic diet was also investigated for treating various disorders other than epilepsy.

The ketogenic diet reduces seizure frequency by more than 50% in half of the patients who try it and by more than 90% in a third. Three-quarters of children who respond do so within two weeks, though experts recommend a trial of at least three months before assuming it has been ineffective. Children with refractory epilepsy are more likely to benefit from the ketogenic diet than trying another anticonvulsant drug. Adolescents and adults may also benefit from the diet, though compliance with oral diet (vs. tube fed) remains a problem.

A study with an intent-to-treat prospective design was published in 1998 by a team from the Johns Hopkins Hospital. And followed up by a report published in 2001. As with most ketogenic diet studies, no control group (patients who did not receive the treatment) was used. The study enrolled 150 children. After three months, 83% of them were still on a diet, 26% had experienced a sound reduction in seizures, 31% had had an excellent reduction, and 3% were seizure-free. At 12 months, 55% were still on a diet, 23% had a good response, 20% had an excellent response, and 7% were seizure-free. Those who had discontinued the diet by this stage did so because it was ineffective, too restrictive, or due to illness, and most of those who remained were benefiting from it. The percentage of those still on a diet at two, three, and four years was 39%, 20%, and 12%, respectively. During this period, the most common reason for discontinuing the diet was because the children had become seizure-free or significantly better. At four years, 16% of the original 150 children had a sound reduction in seizure frequency, 14% had an excellent reduction, and 13% were seizure-free. However, these figures include many who were no longer on a diet—those remaining on the diet after this duration were typically not seizure-free but had had an excellent response.

It is possible to combine the results of several small studies to produce more substantial evidence than that available from each study alone—a statistical method known as meta-analysis. One of four such analyses, conducted in 2006, looked at 19 studies on 1,084 patients. It concluded that a third achieved an excellent reduction in seizure frequency and half of the patients achieved a sound reduction.

A Cochrane systematic review in 2018 found and analyzed eleven randomized controlled trials of the ketogenic diet in people with epilepsy for whom drugs failed to control their seizures. Six trials compared a group assigned to a ketogenic diet with a group not set to one. The other trials compared types of diets or ways of introducing them to make them more tolerable.In the largest trial of the ketogenic diet with a non-diet control, nearly 38% of the children and young people had half or fewer seizures with the diet compared to 6% with the group not assigned to the diet. Two large trials of the Modified Atkins Diet compared to a non-diet control had similar results, with over 50% of children having half or fewer seizures with the diet compared to around 10% in the control group.

A systematic review in 2018 looked at 16 studies on the ketogenic diet in adults. It concluded that the treatment was becoming more popular for that group of patients, that the efficacy in adults was similar to that of children, and that the side effects were relatively mild. However, many patients gave up the diet for various reasons, and the quality of evidence was inferior to studies on children. Health issues include high levels of low-density lipoprotein, high total cholesterol, and weight loss.