Why is celebrated on June 21?

Have you ever wondered why International Yoga Day is celebrated on June 21? There is a very special reason behind this. Indeed, June 21 is the longest day in the northern hemisphere, which some people call summertime as well. According to the Indian tradition, after the summer solstice, the sun turns southward. It is said that the time of Dakshinaayan of the Sun is very beneficial in achieving spiritual accomplishments and hence celebrate 21 June as ‘International Yoga Day’.

The first International Yoga Day was celebrated on June 21, 2015. On the first yoga day, India also had two great records. On this day, PM Modi had done yoga on Rajpath with more than 35 thousand people. The first record is 35,985 yoga and the second record is to take part in this festival by people from 84 countries.

The International Day of Yoga has been celebrated annually on 21 June since 2015, following its inception in the United Nations General Assembly in 2014. Yoga is a physical, mental, and spiritual practice that originated in India. The Indian Prime Minister, Narendra Modi, in his UN address suggested the date of 21 June, as it is the longest day of the year in the Northern Hemisphere and shares a special significance in many parts of the world.

The idea of an International Day of Yoga was first proposed by the current Prime Minister of India, Narendra Modi, during his speech at the United Nations General Assembly (UNGA), on 27 September 2014. He stated:

Yoga is an invaluable gift of India’s ancient tradition. It embodies unity of mind and body; thought and action; restraint and fulfillment; harmony between man and nature; a holistic approach to health and well-being. It is not about exercise but to discover the sense of oneness with yourself, the world and the nature. By changing our lifestyle and creating consciousness, it can help in well being. Let us work towards adopting an International Yoga Day.

On 11 December 2014, India’s Permanent Representative Asoke Mukherji introduced the draft resolution in the United Nations General Assembly. The draft text received broad support from 177 Member States who sponsored the text, which was adopted without a vote. This initiative found support from many global leaders. A total of 177 nations co-sponsored the resolution, which is the highest number of co-sponsors ever for any UNGA Resolution of such nature.

When proposing 21 June as the date, Modi said that the date was the longest day of the year in the mass northern hemisphere (shortest in the southern hemisphere), having special significance in many parts of the world. From the perspective of yoga, the summer solstice marks the transition to Dakshinayana. The second full moon after summer solstice is known as Guru Poornima. Shiva, the first yogi (Adi Yogi), is said to have begun imparting the knowledge of yoga to the rest of mankind on this day and became the first guru (Adi Guru).

Following the adoption of the UN resolution, several leaders of the spiritual movement in India voiced their support for the initiative. The founder of the Isha Foundation, Sadhguru, stated, “this could be a kind of a foundation stone to make a scientific approach to the inner well-being of the human being, a worldwide thing… It’s a tremendous step for the world.” The founder of Art of Living, Ravi Shankar, lauded the efforts of Modi, saying, “It is very difficult for any philosophy, religion or culture to survive without state patronage. Yoga has existed so far almost like an orphan. Now, official recognition by the UN would further spread the benefit of yoga to the entire world.” 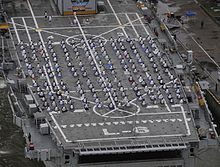 The first International Day of Yoga was observed around the world on 21 June 2015. The Ministry of AYUSH made the necessary arrangements in India. 35,985 people, including PM Modi and dignitaries from 84 nations, performed 21 asanas (yoga postures) for 35 minutes at Rajpath in New Delhi, becoming the largest yoga class ever held, and with the largest number 84 of participating nations. Similar days have been held in cities in India and around the world each year since then.

An Associated Press report in 2015 noted that the first “International Yoga Day” involved “millions of yoga enthusiasts” who “stretched and twisted”, as well as Modi and members of his cabinet. It stated that the main road in Delhi had become an exercise area for the occasion, and reported that while Modi was speaking of “peace and harmony”, some people in India thought the promotion of yoga was a partisan Hindu operation. It reported that a sequence of Surya Namaskar (sun salutations) was dropped because Muslims objected to the implication that the sun was the Hindu god of the sun, Surya; the chanting of the Hindu sacred syllable “Om” was also dropped. Others considered that the money spent on the event might have been better spent on cleaning Delhi’s streets.

The Christian Science Monitor wrote in 2016 that the 2014 United Nations resolution had been “wildly popular” but noted that yoga had a “meditative component” and had become known as not only a form of physical exercise but also a mental and spiritual practice. It gave as evidence the 2015 sermon by Pope Francis cautioning Roman Catholics about the idea that yoga could be a path to God; it noted, too, that Modi had replied to the charge that the Day was intended to promote Hinduism with the words “Yoga is not about the other life. Therefore, it is not a religious practice”.

The Week started in 2015 that the government of India’s purpose in holding International Days of Yoga was to have yoga recognized around the world as “India’s cultural property”, citing India’s minister of yoga, Shripad Yesso Naik as stating “We’re trying to establish to the world that it’s ours.” The Week wrote that this was not likely to succeed, not least because many types of yoga were already being practiced in the Western world. The article noted that Christian evangelicals agreed with the Indian government that yoga was “primarily a Hindu spiritual practice”, but quoted the scholar of religion Ann Gleig as saying that most Western yoga was markedly changed by being in the West, and was devoid of religious content; the “ironically” agreeing views of strongly religious Hindus and Christians were “historically flawed”.

Protecting Your Feet in the Summer